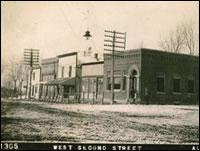 Henry Allen, Jr., was born March 17, 1844 in the northern part of Ireland. Henry married Elizabeth Holmes and had daughters –Sarah, Mary, and Martha–they came by covered wagon to Nebraska and took a Homestead in Dixon County in 1870 where the town of Allen is presently located. In 1890 Mr. and Mrs. Henry Allen began the history of Allen when they sold 40 acres of their land to the Pacific Town Site Company to develop a town. After a good deal of discussion it was decided to name the town “Allen”. Construction of the Sioux City and Ogden Short Line Railroad began in 1890.

The town grew rapidly and soon the Methodist Church was started. Frank Surber opened a fine hotel on September 1, 1890 and the Allen State Bank was open for business on the 9th of August. New houses were being built and the first lighting was a jet gas system owned and operated by Ora Whitford. He went around each evening and lighted the torches by hand.

One of the first necessities was a post office and this was ready for business in June of 1890 in the office of S.I. Hart’s Implement Company. The election board was A.W. Whitford and Albert Sharp, clerks and S. I. Hart, Henry Allen and Silas Wheeler, judges.

A well was sunk in 1890 near the railroad section house at the foot of the hill. At 252 feet a pit of water-bearing gravel was struck and a pump put in for the depot and steam engines. The water problem was serious for the first years as water had to be hauled in barrels for culinary purposes. Many cisterns were constructed for other water uses and in 1913 good new wells were sunk.

On May 16, 1893 the town was incorporated with a population of 200. There were two hardware’s-Tripp & Company and C. A. Coffin–as well as Edwards & Bradford and Snyder & Co. lumberyards. A real estate office run by J. K. Lennox and J. F. Hall was a busy place. In 1899 the Allen News published it first edition and was in business until 1943 when the editor, Roger Hill, went off to the war. 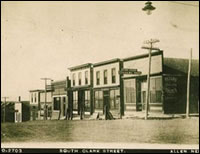 In 1901 Allen was a busy community and there were more businesses coming to town including a meat market, three general merchandise stores, two dray lines, grain dealer, livery stable, an undertaker, two doctors, and a dealer in coal and wood.

In 1903 the Allen Marching Band became a popular attraction at fairs, picnics and parades. O.S. Grant was the director and the band members were sixteen to twenty young men, most of them Civil War Veterans. Uncle Billy Pomeroy, who had been a drummer in the Civil War, was the snare drummer. Everyone loved the concerts in the Main street bandstand on Wednesday and Saturday nights.

The early town was on a hill higher than they are now. The townspeople decided to lower the town. First the buildings had to be propped up high enough on poles so Jack Milligan and his team of mules could work beneath them and remove the earth. Then the props were removed and the buildings lowered to the ground.

On September 25, 1913 a disastrous fire swept through the town. It started in the west end of Lindahl’s store about 3:00 a.m. The water stand pipe was empty so it was almost impossible to fight the fire. Tools and fixtures in the Gates Barber Shop, Carl Austin’s household goods and stock and fixtures in Guy Warner’s Pool Hall were saved. Jim Brittain’s harness shop had living quarters and the telephone office upstairs and these were a complete loss. The electric light and gas plants were put out of business. On November 20, 1914 another fire started at 6:00 p.m. in Good’s Building and burned Sterling Stewart’s insurance office west of it, the E&B Hardware & Lumberyard, the old Ed Allen Building and Heckt’s House.

The first meeting held in the Lutheran Church was on February 16, 1913. A Catholic Church was located west of the school house and some of the old church is now part of Phyllis Swanson’s house. The Assembly of God Church first met in 1939. The church was later discontinued and the building sold to the Dixon County Historical Society.

In 1890 negotiations were commenced to form a new school district and this became Allen School District #70. The first classes were held in the old Carpenter’s Cream Station building. This was only a temporary arrangement and the group soon moved to a larger two room building which had been erected in 1893 on the present school site. The first two teachers were Miss Kate Myers and Miss Dale Ryan. Miss Lizzie Carpenter was the principal and F.D. Fales was superintendent. Not all children, mainly the boys, were unable to attend school in the spring due to helping with the farm work. In 1918 a program of school consolidation was effected and a new three story brick building was erected. When the consolidation district was formed horse drawn buses brought the children to school. The routes were considerable shorter than they are now. By 1935 the school had four Model A Ford Buses.

In 1938 the first diesel locomotive, the Zephyr, came through Allen on the CB&Q Railroad tracks. School was dismissed so the school children could see the huge diesel. Many of us still have pennies that were placed on the tracks for the locomotive to flatten.

“Doc” Hutchings movie theater showed top pictures and was one of the centers of Saturday night recreation until the coming of television. The town was always open on Saturday nights, there were band concerts and the chance for friends to meet and visit while they did their “trading”.

Many of the old businesses are gone but Allen is still a progressive town in the center of a beautiful and friendly farm community. It is “home” to the descendants of pioneer families as well as newcomers.